I'm not sure if you know, but the Gazelle comes with its own built-in AXA wheel lock. This is extremely convenient and is another thoughtful feature provided by Gazelle to make the bike more user-friendly. If I am somewhere where I can see the bike, I just use this lock.


As you can see it locks through the wheel.

Considering the amount of air between the spokes, it is surprising the number of times I have to rotate the wheel as the lock is directly over a spoke or over the inner tube valve. Fortunately Gary from MySpokes warned me about this when I bought the bike because otherwise I would probably have broken a spoke!

If you want extra protection for your bike, you can lock it with the AXA cable lock that conveniently fits into the bike frame. 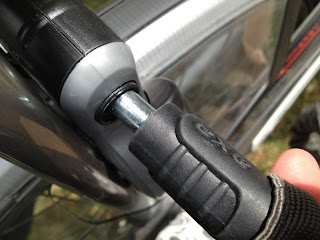 Now I am hopeless with keys. I put them down when I go into the house and immediately forget where they are. So while the Gazelle comes with two keys as standard, I was sure that at some stage - probably far, far, from home  - I would misplace a key.

So I decided to order two new keys from Gazelle. This is pretty easy. You simply go to the Gazelle Australia site and click on Support (or click here.)


I duly ordered and paid for two keys and they arrived pretty promptly. But have a look at the package that arrived (below). 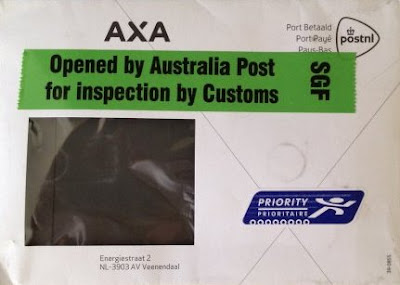 Clearly something suspicious was flagged at Australia Post. I wonder if they thought it was odd someone would just get keys or if the sniffer dogs detected some trace of cannabis from those liberal Dutch!

Anyway, they got through and now I am planning on putting a spare key in each our cars and have another spare at home. Hopefully I will never get stuck too far from a key with a locked bike.