Looks like it is the week for long rides.

Jules has now received her Gazelle Innergy, so Mr Aggy, Jules and I decided to do the Warburton (or Warbie) Trail. Not the whole lot, because we weren't sure of the battery range, but most of it. The trail starts at Lilydale and goes to Warbuton (about 40 km). We decided to start at Wandin North.

As the Thule Europower was going to have Jules and my Gazelles on it, Mr Aggy installed 'Bike Inside' in the back of the XTrail and put his bike inside the car. It was then a longish drive to Jules to load her bike and onto our starting point. We were taking a picnic, so I unpacked my food, picnic packs (and wine) into my panniers and off we set.

But disaster - my bike wouldn't work! The battery LEDs would light up, but the Gazelle would not turn on. I thought that perhaps I had not installed the battery correctly as I had charged the battery off the bike for the first time on the previous night.

In desperation, I called Sean at MySpokes who told me to bring the bike in. Fortunately we were pretty close to Mooroolbark, so I left Jules and Mr Aggy at Wandin and went to see Sean. He put the bike on the computer and it seemed I had a faulty battery. (Unlucky to get that battery, but so lucky that the fault occurred on this ride, not miles across the country!)

Sean being such a great guy replaced my battery with another Gold battery and all was OK. (I really can't praise MySpokes too much. If you want a Gazelle, buy one from there!)

Back I went back to Wandin, where it had just started to rain. No problem, we set off anyway.

Now the views along the Warbie trail are lovely. It is a nice, rural ride. However, I am pretty much a city girl. I love the city trails. I like paved trails and never being too far from a coffee shop or restaurant. So it was a bit of an adventure for me to go onto the Warbie trail and it was great that the pedelec made the ride so easy. (Poor Mr Aggy had to rely on his legs alone.)

However, we all felt the Warbie trail could do with a bit of maintenance. The trail has lots of loose gravel and you had to make sure you cycled in the well-worn paths, or you could lose your bike.  The bridges are in very poor repair and need a major make-over.

Also, my advice is to ignore the sign to the bakery unless you have a mountain bike and are considerably more daring than Jules and I. The trail up is very steep and has had a covering of large stones. Jules and I detoured up there but we ended up pushing the bikes to the top and walking down. 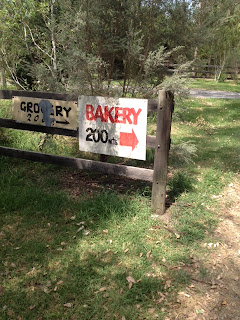 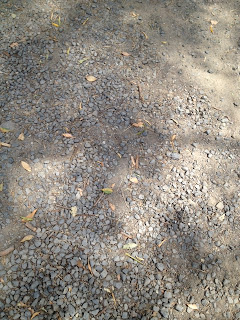 Once at Warburton we had a very tasty picnic lunch by the river washed down by a glass of wine. 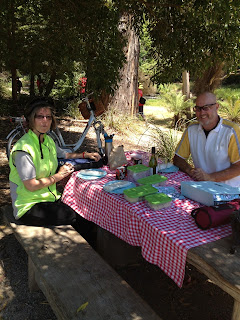 If you are looking for a great picnic food, I recommend the Coronation Pies - easy to make and delicious.

Unfortunately, a strong head wind blew up on the way back. And despite the rain in the morning, the dust got up. It was really dusty. And quite unpleasant.

One highlight was stopping at the Home Hotel at Launching Place. It has a very pleasant beer garden and they have thoughtfully provided a bike rack on the trail. It also has clean toilets - 9/10.


After leaving this oasis, we found the headwind was getting worse, not better. It was really making the ride very hard work and the pedelecs had to be on boost. (Poor Mr Aggy, at least we had boost.)

Jules and I both had one bar remaining on the battery and were starting to feel a twinge of range anxiety.

Disappointingly our final target of the Carriage Cafe in Seville for a coffee had closed at 3:00 pm and we were too late. So it was just a dusty slog back to the car.

It is interesting the difference a trail ride with a headwind makes. Yesterday, a 32 km ride on a paved, hilly road with quite a lot of 'boost' used one bar (probably close to using two bars). Today, a 56 km ride on gravel and we were well into the fifth and final bar.

Ride Details:
You can view the ride on Strava here.