Fitness improving and another winery ride

Don't let anyone tell you that pedelecing does not make you fitter.

On Saturday, I rode with the usual Saturday group up to Ceres lookout on my Trek bike. Those of you who are not familiar with Geelong can probably figure out from the 'lookout' that it was up a very steep hill. I have attempted this before and never made it. On Saturday, I finally made it in one go - no stops. I felt like Cadel Evans climbing L'Alpe d'Huez.

All up, this monumental, unassisted ride was 25 km.

But the story doesn't stop there. I added another 57 km on the pedelec later!

What happened was, after the morning ride coffee, Mr Aggy and I decided to test the Gazelle's battery range again. This time we decided to ride to Banks Road Winery. This is about 1 km off the Bellarine Rail Trail in Marcus Hill. I rang and booked for lunch and we were off.

The aim of this trip was really to see how feasible it would be to get to Queenscliff and back on the pedelec. Banks Road Winery is a fair way along the trail to Queenscliff, so it would be a good indicator of whether the pedelec could make it. I made sure I was riding very conservatively and trying to have zero assist wherever possible. Fortunately, the Gazelle has great rolling, so this helped.

I did the first 11 km with no assist and after that tried to stick to Eco when I needed assist. I had to Boost up from the rail tail to the Winery entrance, as the road is quite steep there. (Poor Mr Aggy had on leg assist!)

Incidentally, some revegetation projects along the Bellarine Rail Trail are sponsored by Geelong companies. This section is sponsored by Tuckers funeral company which I found quite amusing - if something happens on the trail and I shuffle off this mortal coil, Mr Aggy now knows who to call. 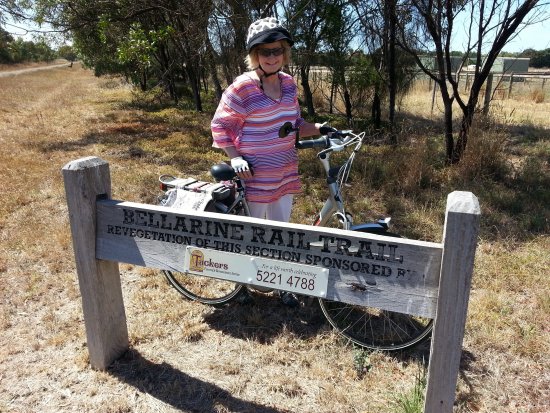 A comment here about the trail. In the section from Drysdale to Banks Road, the City of Greater Geelong (COGG) has put down a thick layer of very fine toppings. In some spots, particularly at the bottom of the hills, this is very hazardous as it is hard to see until you are right on it. It is like riding through sand and quite dangerous to hit at speed (hence the advertisement for Tuckers?) We had to ride single file through these areas. I think the COGG should tamp this material down, not just dump it on the trail.

We had lunch at Bistro at Banks. (5 bars left on the gold battery at this stage - 29 km from home). We were a bit hot after the ride, and they moved a table outside for us and set it up while we had a wine tasting and selected a bottle to have with lunch.


The food was delicious and the staff were wonderful.  It seems the Bistro and the Winery are run by two separate people now, so if you want to eat, make sure you check the Bistro at Banks site. (It is not open Tuesday and Wednesday). The toilet is a 10/10 - high praise indeed.

Even though I had all five bars left, I still rode conservatively on the way home. The first bar went at 40 km, which was right at the crossing at Curlewis over the Portarlington Road. 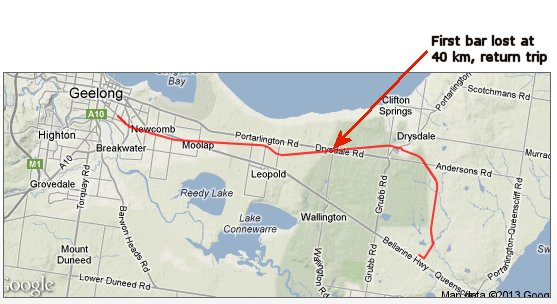 I had one slight problem on the way home. The drawstring in my pants broke and so I had  to fashion a makeshift belt to try and keep them up. Unfortunately, the Bellarine Rail trail has quite a number of road crossings close to Geelong, each of them with a chicane requiring you to slow down and negotiate around a sharp turn. I had to hop off my seat at each of these - and you guessed it, each time I had to pull my pants up! But I made it home, modesty intact. J

Update: Kept the meter running and did another 12 km (riding conservatively) before the next bar went out.