Jules and my latest expedition has been up the Maribyrnong River Trail.

As Jules comes from Croydon and I live in Geelong, we decided to meet in the middle again at Southern Cross Station. This time, (on my neighbour's advice), I took the 7:27 am train to Melbourne. The advantage of this train is that it starts at Geelong station, so if you get there early, you can load the bike at your leisure. Much easier when the bike is takes up most of the bike rack in those VLocity trains. The downside is that it leaves from platform 3, so you need a VLine employee to get you across the train lines. It also arrives on platform 12, so you need to take the lift up to get out of the station. (You get some nasty looks from people as it takes up most of the lift.)

Jules and I set off and had coffee in Docklands at the same place as when we did the Capital City Trail. This seems to be about the only place open in Docklands at this time (9:30 am) - talk about tumbleweeds - the place is deserted.

Then we set off to find the mighty Maribrynong aided only by a color print-out from Google maps. (This turned out to pretty useless and we need to find a better system for the future if we are to have any hope of finding our way around unaided by the kindness of strangers.)

We cycled past Costco and along Footscray Road past the docks until we reached the Maribyrnong. (That is a hard word to spell!)

Our first stop was in front of a Blacksmith's in Footscray. They were getting ready for the inaugural the International Blacksmith’s Festival run by the Waterside Metal Art Workers. The fellow we were chatting to told us they had three blacksmiths out from Belgium and were running classes all this week. (I notice the festival was promoting Craft Belgium Beers, so I wonder if they imported this too?) 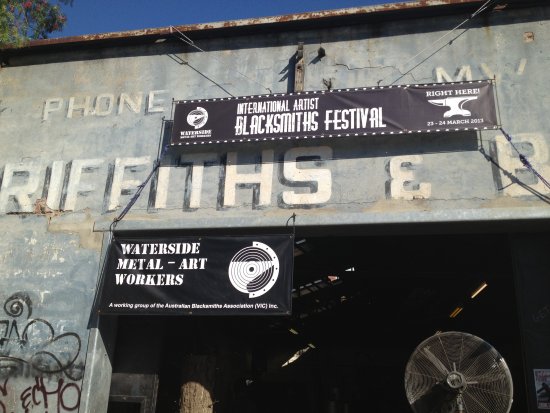 There was a great metal seat nearby which we assume was an example of their work. 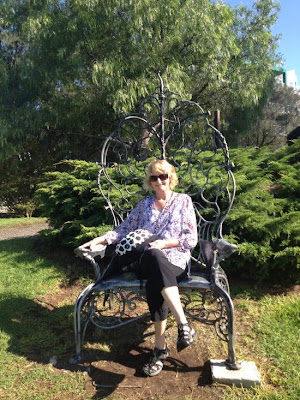 Just outside the blacksmiths we saw this child-friendly bike. Looks like one child sits on the pack-rack seat and one sits in the child seat. 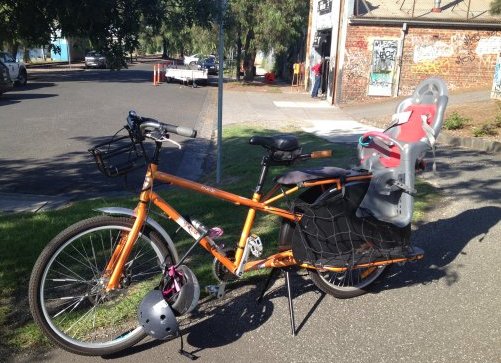 A bit further up the trail, there was a detour sign, but we thought we'd see how far we could go. I've always been interested to see the Heavenly Queen Temple close up. 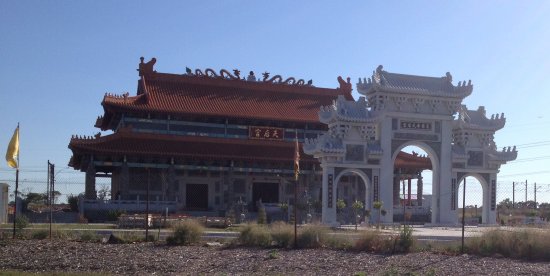 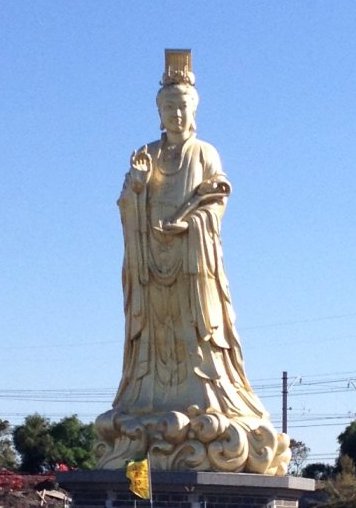 As it turned out the trail was closed just past the temple (supposedly until April 30 2013). We had to double-back and cut through Footscray before rejoining the trail at Footscray Park near Flemington Racetrack. I've made this sound easy, but really it took us ages to figure out where to go. A couple more signs would be helpful - take note Footscray Council.

The ride along the river here was very pleasant There were nice wide paths and very interesting views. I am not familiar with this part of Melbourne at all and it was a really fascinating. Lots of new developments as well as a good mix of old and new houses. (Many had boat ramps.)

The Angler's Tavern was a bit further up the trail and I went in to check it our as a possible lunch venue. I was not impressed. It is a big barn of a place in need of a paint. The toilets are in poor condition and not recommended 3/10. However my view of the Angler's Tavern may be jaundiced by the young girl at the bar offering me the Senior's menu! (I still have five years to go...)

So onward we went to Ascot Vale and into the Afton Street Conservation Park Wetland. This runs by the river and also includes a very steep hill with sweeping views of Melbourne. The track here was gravel and because it was very steep, it was quite nerve-racking to ride (both up and down). However, with a bit of pushing, we made the top and were rewarded with a great vista of the Department of Defence bunkers and Melbourne in the distance.

Continuing on, we came to what we figured must be a difficult climb. 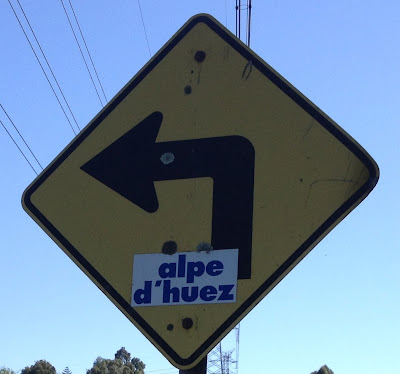 It was, in fact, a climb up a very steep hill with lots of switchbacks. No problem for the Gazelles but I wouldn't want to do it on my Trek.

The view from the top was pretty good.

This was basically the end of our ride out. We realised if we continued on we wouldn't manage to fit in lunch (very important) and still catch the off-peak train.

We rode back on the other side of the river and mentally noted The Boathouse as a possible lunch place in the future. We chatted with some patrons there who were admiring the Gazelles - obviously people of taste - and they said it was very good. (Actually in looking for the link to 'The Boathouse', I've realised it is Gary Mehigan's (of Masterchef fame) restaurant. I want to go!!!) 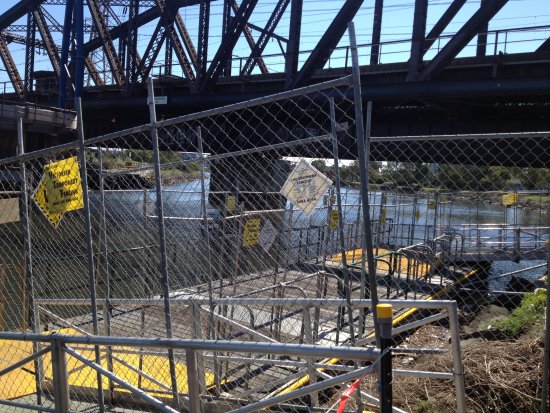 We had an OK lunch in North Melbourne and then back on the train. I had to leave my bike in the conductor's carriage, but I made sure to lie it down for the trip. No damage this time - hooray!