Last Wednesday Jules and I decided to catch the train to Pascoe Vale, ride along the Western Ring Road and then ride down the Merri Creek Trail to the CBD. (Kaz couldn't make it, so it was just the two of us). Good plan - but as you will see there were a few difficulties.

We met at Southern Cross and caught the train out to Pascoe Vale station without any trouble. I had sussed out a good spot for coffee - Jack and Daisy's - and we were able to ride down some quiet streets to get there. There was a bit of uphill, but not too much.

Jack and Daisy's has good coffee and friendly staff and it rated well on Urbanspoon - but, oh dear, it is let down by the toilets. Dirty, no soap, minimal toilet paper - 3.5/10. Also, it was obviously rubbish collection day in Pascoe Vale and there was quite a lot of rubbish on the footpath that had fallen out during collection near the outside tables. It would have made the place look a bit more attractive if this had been cleaned up.

After coffee we set off and joined the Moonee Ponds Creek trail at Gaffney Street. This is a very attractive trail that takes you up to the Western Ring Road.


It was while we were riding along here that Jules noticed a few issues with her bike.

I should give you a bit of background here. For some time Jules has seen an error flash on her controller when she turned on her bike. It has unfortunately been an intermittent problem and when Sean at MySpokes checked it, the controller did not log any error. Intermittent errors are notoriously hard to track down and we thought at some stage it would become more pronounced. Well it happened on this ride!

First Jules noticed that her bike seemed non-responsive. It didn't feel like Boost was really boosting  So we swapped for a while, and yes, it was clear that the level of assist on Jules' Gazelle was pretty low. An error 'C4' also kept flashing up.

As we rode a bit further we found that sometimes the bike was not assisting at all. It seemed to come on randomly when riding. Changing gear might prompt it to come on for a bit - but then it went off again. We took the battery out and reseated it a few times, but it didn't help.

There was a massive hill up from the trail to follow the Ring Road which my bike managed in Boost. But Jules and I had to take turns at riding and pushing her bike to the top.

So we had the decision, do we abort the ride or go on? In the end we decided to continue on and I offered to share the pain of the hills. (However, Jules never took me up on this again  - I would in the reverse situation!)

Annoyingly, Jules' bike later began giving intermittent or no assist up the hills and then coming on just as she crested the hill.

We rode along the Western Ring Road and as usual, despite multiple maps, we made a wrong turn. We ended up by a lake in the Jack Roper Reserve, very pretty, but not where we needed to be. 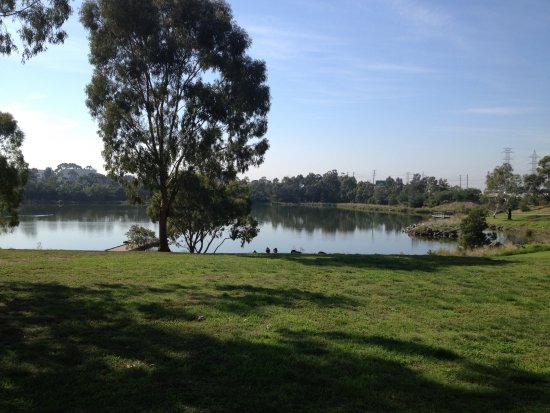 A quick backtrack and we were on the right path again. But then, we came to roadworks. As anyone in Melbourne will tell you, they are ALWAYS doing work on the Western Ring Road. Well, this work sealed off the bike track and there was no advice on where to detour. However, we noticed that no one seemed to be working, and there were a few bike tyre marks through the sealed-off bit so we took our chances that we could get through.

Unfortunately, this would be the one day that they were actually doing something - not just closing off the road for future works - and a fair way down the track we had to turn back.

Luckily we had every street directory known to man in our packs, so we worked out a route that took us to Merri Creek.

A couple of km into our detour we discovered this sign.  As you can see, they are running well behind schedule. 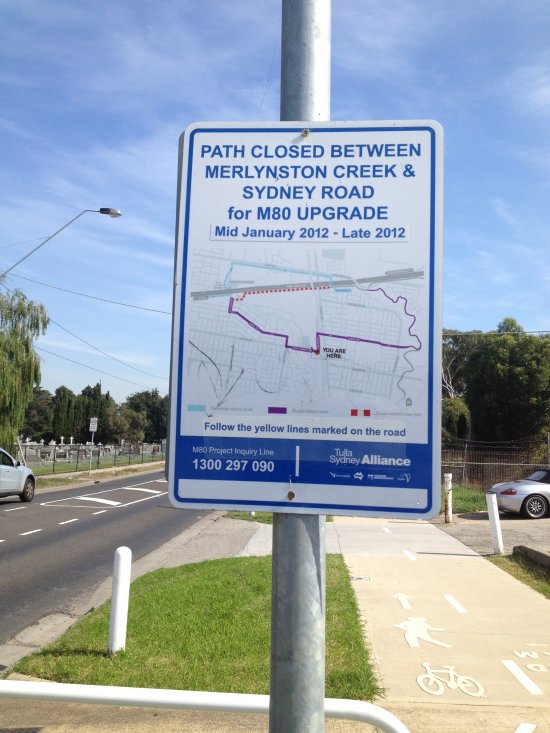 Strangely for us, we found the Merri Creek trail without any problems. What a great trail! Beautiful scenery, well-signposted and a great trail surface. I highly recommend this trail. 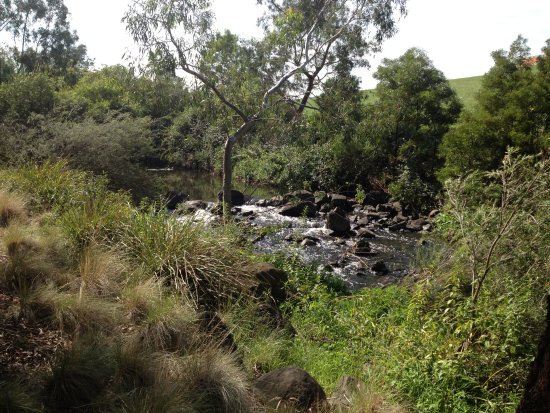 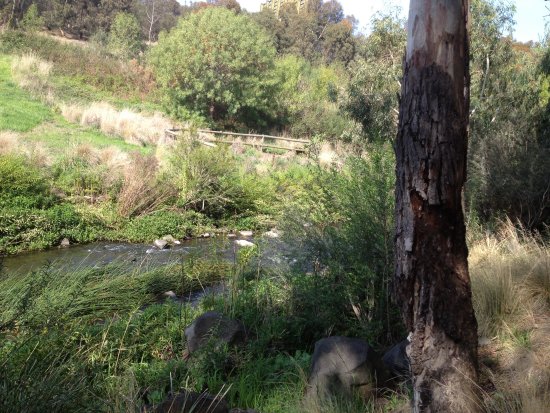 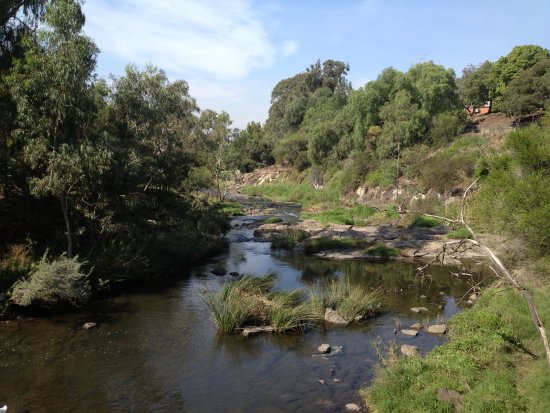 The trail runs past Coburg lake and the old Pentridge prison (now apartments).

Coburg also has a great outside gym! I've never seen anything like this. It must be very sturdy as there was no signs of vandalism and all the equipment worked well. What a great idea.

The rest of the ride was just as interesting.

This was quite a long ride and I was trying to use legs a lot in sympathy with Jules. So by the time we joined the Capital City Trail and rode through Clifton Hill, Parkville and down through Docklands we were really tired and felt as if we had really earned our lunch.

We had lunch at The Left Bank in Southbank. $22 including a glass of wine. The food was excellent but the service was a bit patchy. The toilets rated well - 9/10.

Vline service was totally overcrowded on the way home. They had cut five carriages down to three. And one poor lady near me had her baby vomit everywhere! But we had a great conductor who looked after my bike, so I was happy.

I was really tired that night but I think Jules would have been exhausted. I also got caught out a bit with the heat - 27C and I was a bit dehydrated. I need to watch out for that.