Geelong to Queenscliff and Back

Well,  sorry about the long lapse in posts, but I've been busy!

In August and September, Mr Aggy and I went overseas and did four different cycling tours. Three required the full use of legs, but the last was a four-day tour in Provence on electric bikes. Fabulous! Mr Aggy thinks this needs its own post, so I will give you the information later.

Then when we got back to OZ, I hopped on my normal Trek and promptly fell off and hurt my ankle. (Worst thing was I was still in my own driveway!)

So anyway, it's a new year and more rides are planned. Those of you living in Melbourne will know that the suburban trains are having lots of upgrades in January and VLine is its normal disastrous self, so Jules has left her bike here with me in Geelong.

I've always wanted to see if we could get to Queenscliff and back on the one Gold battery. Mr Aggy and I had previously ridden to Banks winery and back, so I thought it should be possible.

So a couple of Wednesdays ago we set off. (Mr Aggy works from home on a Wednesday, so he promised to pick us up if we ran out of juice.) Wednesday was a lovely day, but with a very strong Easterly wind. This meant we were riding into a strong wind all the way along the Bellarine Rail trail to Queenscliff.

I had ridden my bike around Geelong a bit before the trip, but Jules hadn't ridden at all. So a few kms into the ride we noticed her back tyre was a bit flat. Now I have to confess here that neither Jules nor I have ever pumped up a Gazelle tyre. So we took off the pump and Jules had a go - unsuccessfully. So unsuccessfully in fact that the tyre ended up completely flat. There was no way we could get it to pump up (especially since I told Jules to put the valve in the wrong way around!) Anyway we had to ring Mr Aggy who trundled out with the big pump and fixed us up. 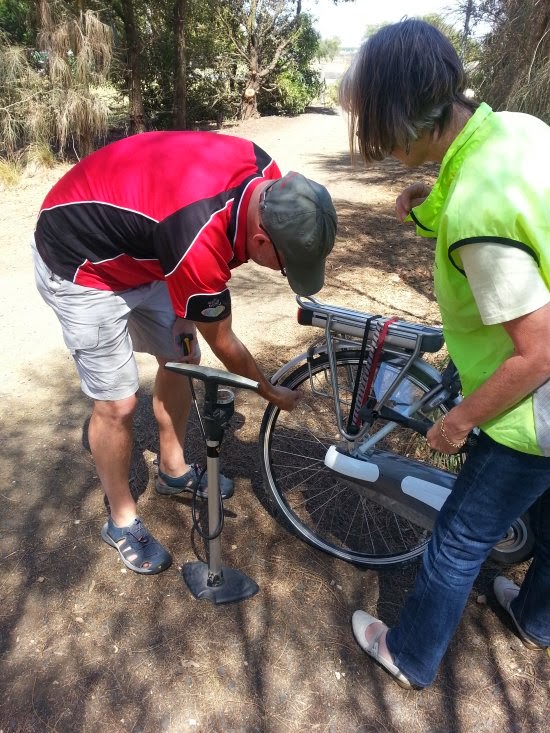 So, slightly delayed we set off again. Our first stop was Banks Road Winery and the Bistro at Banks. This is an easy ride up the road from the Bellarine Rail trail. We both had a glass of the Banks Pinot Gris - delicious.

This place was packed for lunch, the staff were extremely friendly and nice and the toilet was a 10/10. I read that they have a seafood night on a Sunday night, so I'd like to go back with Mr Aggy sometime. At this stage we had done 28 km and lost one bar. 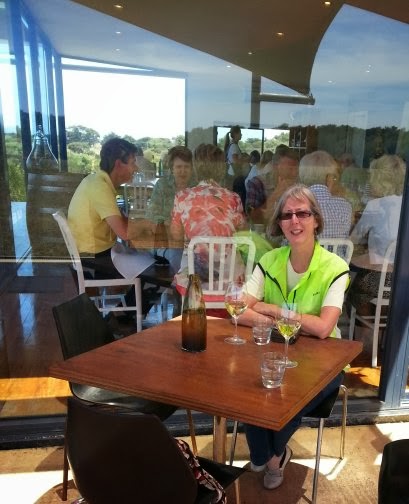 Jules with the Banks Pinot Gris

Once we left Banks, it was just a short hop to Queenscliff and a late lunch at Charlie Noble cafe. We had dips and shared a pizza - really far too much food. Excellent value and the staff were really nice. At this stage we had done about 42 km - two bars down.

So we started back quite late in the day. The wind had turned a bit, so it wasn't directly behind us - typical! Another issue is that Jules' bike is still not quite right. Her Boost is like my Normal setting and her Normal is like my Eco. So we swapped for a bit on the way back in order to try and make the distance.

As it turned out, we made it easily - two bars left on my bike and one bar left on Jules. (As she had supposedly boosted all the way the Queenscliff, clearly something is not quite right.)

All up we did about 79-80 km (I didn't start or finish the Strava record at my house, so we did a couple of kms above what it shows.)

Email ThisBlogThis!Share to TwitterShare to FacebookShare to Pinterest
Labels: 80 km on Gold battery, Geelong to Queenscliff by electric bike