How exciting! Another Gazelle owner, Elena, contacted me via this blog about riding with our little group. So after a bit of to-ing and fro-ing via email, a ride was duly set up in Geelong. (If you have read the previous entry you will know that Jules' Gazelle's is in Geelong at the moment.)

Then another friend, Tracey, decided to commandeer her sister's electric bike and come along as well. (Tracey and I often ride together on our non-electric bikes.)


﻿
Tracey's sister's bike (soon to be Tracey's bike, I think) is not a Gazelle but a Flight bought from Goldcross. This seems an excellent bike. It is the previous standard eBike so it has a throttle, but it has hub gears and a torque pedal sensor plus a good battery (LiPo I think). Handy centre stand.

Bought at a run-out sale by Goldcross at well under $1000 - bargain!

I've had a look at the Goldcross site, but I don't think they sell electric bikes any more.
Anyway, the four of us set off mid morning on a lovely sunny day. I had decided that since Elena hadn't seen much of Geelong we should do a Geelong 'showcase' and do a loop that included the Geelong waterfront and the Barwon River.
First stop was the Eastern Gardens to look at the hundreds of fruit bats hanging there. I think they came to Geelong when they were evicted from the Botanic Gardens in Melbourne. (I haven't taken a pic as I didn't think it would turn out very well - but take my word for it, there are lots and lots of bats.)
After that we rode on to the waterfront and had a quick look over Eastern Beach. This is a really nice area with Art Deco kiosk and two swimming enclosures - the smaller one for children has just been renovated. 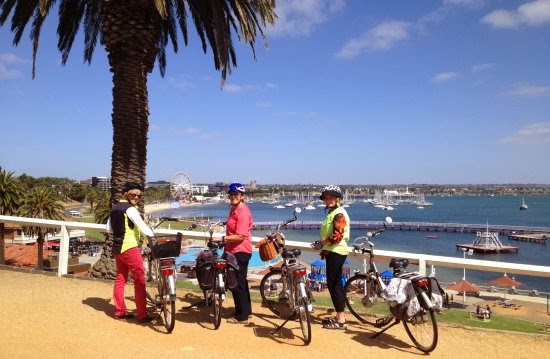 We decided to coffee at the Sheraton - nice setting but extremely slow service. I can't really recommend it - but it does has nice toilets! (8/10)
﻿
After the coffee stop, we rode for some time along the Geelong Waterfront. If you have a look at the Strava feed, you will see that there is a wonderful shared cycle path that runs right along the water.
We then went to look at the Mill Markets - a large store with an eclectic mix of junk - but it was CLOSED! Mid week! Fortunately there was similar shop right next door so we got to browse a bit and speculate on who buys all this stuff.
From there we had to negotiate a bit of the road to get to the Linear Trail that runs from Douro St up to the defunct Cement Works. There is a steep downhill on the road from there to get to the Barwon River.
The river route was lovely and we ended up detouring off the river and cycling to Pakington Cottage for lunch. Nice lunch in the garden there at a reasonable price. (However I don't see too many positive reviews on Urbanspoon!)  I'm not too keen on the toilet (one shared for the whole venue) probably 5/10.
Finally we took the long route via Breakwater along the river to the new Little Creatures Brewery in Swanston St where we finished up for the day.
Little Creatures Brewery is a huge new venue in Geelong with a very trendy feel and slightly too loud music (to my old ears anyway.) There is a great beer garden and a large inside area. Very bicycle friendly.
Well worth a visit if you are in Geelong. But be warned - get there early on a Saturday or Sunday or else you may have to queue. 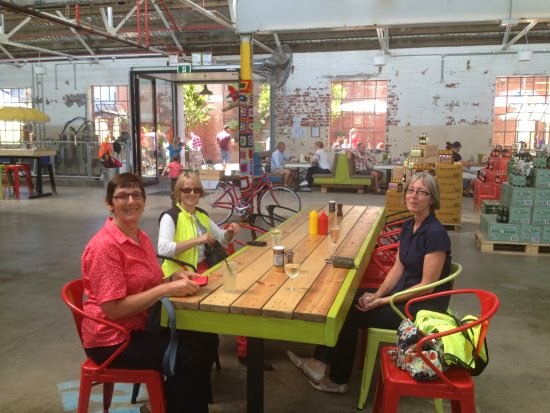 Ride Details:
FYI, Tracey's bike didn't lose a bar and she rode 41 km all up.
You can view the ride on Strava here.